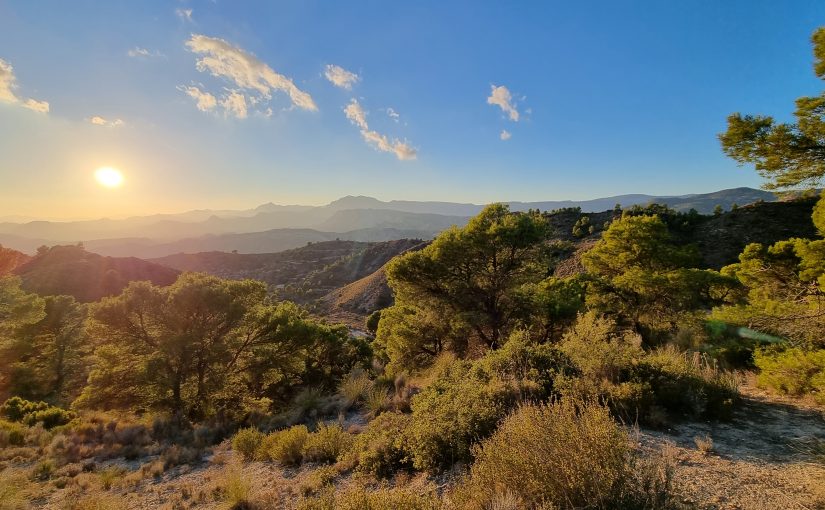 It was the most astonishing sunset. Four of us were sitting amongst the rocks and the shrubs of the mountainside and gazing out at the scene in awed silence. We were in a state of tender, grateful openness, brought on by having drunk a brew made from the San Pedro cactus some four hours earlier. However, on that mountainside time meant nothing. We were present. Present with that ancient landscape, present with the receding horizon-lines, each a subtly lighter shade than the one before, evoking a profound impression of space, depth and mythology, present with each other and present, of course, with that majestic, mysterious and yet so familiar orb of pulsating light that we call the Sun. Someone mentioned later how at no point did any of us try to capture that moment. How telling, that in an age of obsessive recording of any image that may be even remotely meaningful or aesthetically pleasing, it didn’t even occur to us to take a picture of this most beautiful and profound of sights. Was it even a sight? Wasn’t it rather a feeling? Didn’t we feel the oranges and reds and yellows as they swam and throbbed over the horizon? And the sun dropping below the line of the horizon was just the beginning. The disappearance of the sun seemed to release colours from the other end of the spectrum. The deep shades of blue and violet, indigo and magenta, all the colours of San Pedro that had been sparkling and rippling across our visual field during the afternoon as if they were playing hide and seek with us, bled into the dusk. No one tried to record the scene but there was a word which suggested itself to us, resonance. I mentioned it at one point and someone else immediately said that this was the word that he had been struggling to find. The Sun and the sky and the entire scene were resonating with the colours of San Pedro and we were resonating along with them.

Such was just one passage of the Psychedelic Society’s Psychedelic Walk on the slopes of the Cabeçó d’Or mountain near Alicante. Led by Sanson, the walk formed a part of a psychedelic retreat that was being run at La Mezquita and I and my partner joined them just for the day. We met Sanson and Carla and the three other participants at a carpark on the mountainside and from there walked along a path through the shrubs and trees for some fifteen minutes until we arrived at a clearing in which to sit. This was to be the first stop where we would drink the brew before continuing to the place that was referred to only as ‘The Tree’. Sitting in a circle, Sanson spoke to us a little about the plan for the day and about San Pedro before pouring out a dark, slightly viscous liquid into a small cup. After saying a few words, he passed it to the first of us. When it was my turn to drink the brew I was struck by how pungent and bitter it was. It was no small task getting it down without gagging. When all who were planning to drink the brew had done so, we continued on our way until we reached a broad, flat area of ground with a large tree at the far end. This was to be our San Pedro playground.

And what a playground it was. As we arrived I already felt the effect of the brew acting subtly on my senses and my awareness. Whilst I’m sure I would have considered the dramatic terrain beautiful under any circumstances, as the San Pedro started to dissolve our culturally conditioned notions of space, time and beauty we increasingly found ourselves in the midst of a landscape which felt ancient, awe-inspiring and a uniquely appropriate setting for experiencing the intoxication of this desert plant. The word ‘playground’ describes quite well the context for the experience that was created by the Psychedelic Society. It was not a therapeutic setting, neither was it a ceremonial setting, although there were elements of ceremony included.

I suppose if pushed to define the setting that was created I would have to include it in that broad and too-vague category of ‘recreational’. We arrived, and over the course of next several hours we hung out at the tree. There were no organised activities except the picnic. Rather, people chatted, went off to sit alone, came back, looked at the scenery, looked at the detail of some plant or rock. My predilection is to drum and chant, so that’s what I did, drumming and chanting with abandon. On a previous occasion Carla had mentioned how simple she found the psychedelic experience- you need only a nice place to hang out and people you get on with and the plant will take care of the rest. The unadorned setting reflected this approach. There was no great effort made to create a particular setting, but the atmosphere was generally relaxed and good humoured and this conditioned the quality of the afternoon we spent on the hillside. Although he mentioned that his role was just about providing the beverage, I’m not sure Sanson’s role is quite so neutral. He is a self-proclaimed activist, advocating not simply the use of psychedelics but social change as well and he wastes no opportunity to promote his vision of social activism. This comes across loud and clear in his songs which I would imagine play a central role in any psychedelic society event. He whips up a storm with the guitar and sings songs both of personal and political liberation.

As the light started to fade around the area by the tree where we had spent the afternoon, and half-hearted attempts were made to get a fire going, Sanson mentioned that he knew of a cave just a short walk away where there he had plenty of firewood stored and that it would be no trouble to make a fire there. I guess this is something else that marks out a Psychedelic Society event from other commercially mediated approaches to taking psychedelics, that have a clearer ceremonial or therapeutic intent. In my experience, these other approaches aim to minimise the element of uncertainty by providing a very clearly defined context in which the unpredictability of the psychedelic experience unfolds. The Psychedelic Society’s approach is a lot looser around the edges. It is a lot closer to the model of taking a psychedelic with friends where any plan is provisional and might change at any moment depending on which way the wind blows. The difference is that Sanson and Carla have a lot of experience and are always on hand to provide whatever reassurance or support might be needed. I talked to one of the participants about this some days later. His feeling was that, whilst some aspects of the overall experience seemed a little improvised, releasing control was precisely what he felt he needed to work on and, as such, he welcomed the looser approach that the Psychedelic Society provided, feeling that it gave him the space not simply for therapy, but also for adventure. And so it was that we left the path and started to climb through the shrubs and over the rocks in the dying light on this unexpected new departure- to find a cave somewhere in the hills drawn by the promise of warmth, shelter and prolonging the adventure.

We arrived at the cave after a short walk and, as often happens on a psychedelic journey when everything is flowing nicely, it just seemed like the best place in the world to be that night. The cave entrance was small and covered by a door which, according to Sanson, had been put there since the last time he visited by someone more enterprising than him. The sense that custodianship of the cave was shared between the various people who cared for it, even though they had never met and made no claim to ownership, resonated nicely with Sanson’s vision of activism. Inside there were various rooms, one of which contained a small sofa and a hearth. We all squeezed in and spent a couple of hours in front of the fire, Sanson playing his songs of freedom on the guitar and rest of us joining in with drums and choruses. Outside the sky was turning a deep shade of midnight blue and the mountain side was dimly lit by the light of the moon accompanied by two stars. To gaze upon the scene was to be moved by an otherworldly beauty. For one night only we were in a place where magic and adventure meet.